You Can Have Cons OUTSIDE – Visiting California Republic Comic Con

I have known the joy of reading con-bought comics while eating a food truck burger, and I can never go back. 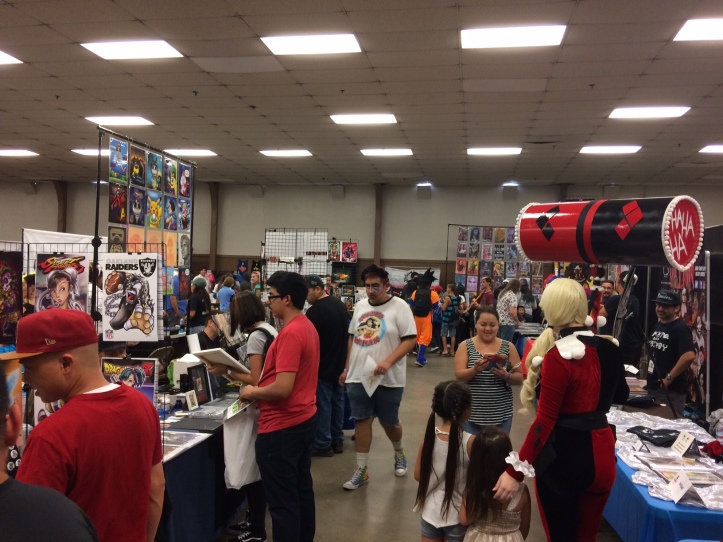 A view from the floor at California Republic Comic Con in Merced, CA.

Due to life events, I missed about five months of comics this year. In an attempt to track down those missing comics, and as an early birthday present to myself, I drove an hour north of Fresno and joined a gaggle of comics enthusiasts and cosplayers at California Republic Comic Con in Merced.

My catch-up mission was unsuccessful, as there weren’t a ton of recent back issues to be found. The con itself, however, was pretty great.

I love smaller conventions because a) you can actually have a conversation with the vendors and artists if you want to and b) you can find good deals without fighting through incredibly crowded aisles. I spent most of my money at two booths, one specializing in trades and one specializing in back issues (I’ll get to the specifics of my haul in a sec). But I also made sure to buy an indy book, as I know booths can be expensive, and I like to support up-and-coming creators as well. (The book itself was okay, but not good enough to recommend. I’m still happy with my purchase.)

It’s always interesting to see what’s hanging out in vendors’ $5 and $10 trade bins, because there’s usually some overlap between booths. That overlap tells you what books stores bet on just a little too big. At CRCC, I saw a LOT of Marvel’s Season One books, as well as a lot of Matt Fraction’s Thor run. Neither of these surprise me, really, although I have a hard time believing Fraction’s Thor is as bad as people make it seem. I didn’t pick it up, as I was trying my hardest to stick to my mission and I’m not a huge Thor fan, but I was tempted by it.

By lunchtime, I’d gathered a smattering of books, including Hellboy in Hell, Batman: Gothic, and a neat Power Man and Iron Fist Christmas special (which you might see more on come December). I took this small collection of books OUTSIDE TO GRAB LUNCH and if you don’t know how amazing those words are to type, you’ve never been to a Midwest con.

In the Midwest, hosting part of a con outside is unheard of. If there’s not a chance of rain, there’s a chance of snow, so getting food outside of the convention hall means either taking a walk or getting in your car to find somewhere else to eat.

Not in California. There was a wonderful burger truck (shout-out to Two Angry Guys) just twenty feet outside the convention hall, as well as a nice sound stage with a geeky band playing. The food cost as much as convention food typically does, but it was ACTUALLY GOOD. I barely got through a comic, because I was too busy eating.

The rest of the con went well. There were some neat cosplayers (notably: a father dressed as Rick Sanchez with a daughter dressed as Captain Underpants, a person dressed as Angel from X-Men who had built their own retractable wings), a little film festival (which was unfortunately positioned right next to the laser tag), and the guys selling good back issues eventually dropped their price from a dollar an issue to fifty cents. I checked out around mid-afternoon, with a stop at the local comic shop’s downtown location, where I did manage to find a couple of the comics I’d actually come for.

I’ve already torn through most of my purchases, and I have thoughts on most of them. Including an unreasonable amount to say about Batman: Prey. So you’ll likely see these stories pop up on the blog at some point. But for now, feel free to rate my picks, share your own local con experiences, and let me know what makes your ideal convention.