Letterers don’t get their due. Even on this blog, I’ve already talked about numerous writers and artists, but not a single letterer.

Only two Bat-Specks in, but we already have a good sense of story and dichotomy thanks to our letterer.

Which is wrong. Because lettering often makes or breaks a comic. Bad lettering distracts from the art and the story, creating something unreadable. Good lettering services both, allowing a comic to unfold smoothly and easily.

I considered cutting this pic down to the bottom four panels, as Nightwing getting hit with a flamingo isn’t entirely necessary for my post, but c’mon.

In All-Star Batman 8, lettered by Steve Wands (also, written by Scott Snyder and drawn by Giuseppe Camuncoli), Batman’s prepared to face a foe he’s fought many times before. He does not believe the Mad Hatter has anything new to offer. The Dark Knight is confident, and it shows in Wands’s lettering. Batman’s narration comes inside crisp, rectangular black boxes. The font is simple and white. This black-and-white narration represents Batman’s focus and confidence. It tells us, without even reading the words, that Batman is not here to mess around, and that he knows what he’s doing.

But the Hatter doesn’t play within boxes. He does not play nice and neat. 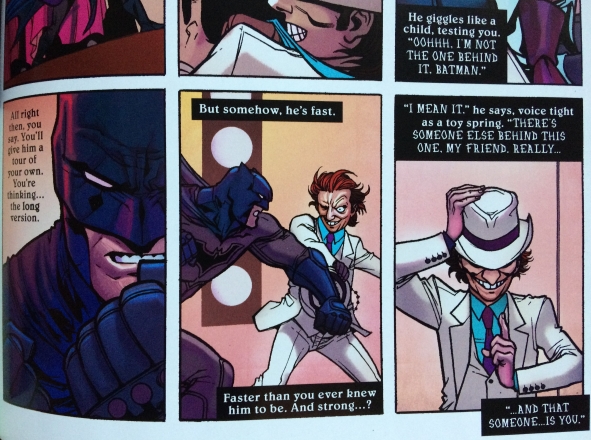 Which makes sense, for a guy called the Mad Hatter.

The change starts slowly, and it starts with the Hatter. The Hatter’s voice breaks Batman’s font. It can’t be bound within Batman’s straightforward serifs; it comes in its own shaky form that signals madness.

At first, it’s just the Hatter who’s mad. But Batman discovers that, whatever the Hatter’s done this time, he’s not prepared for it. The Hatter gets inside his head, not just in the story, but in the font. 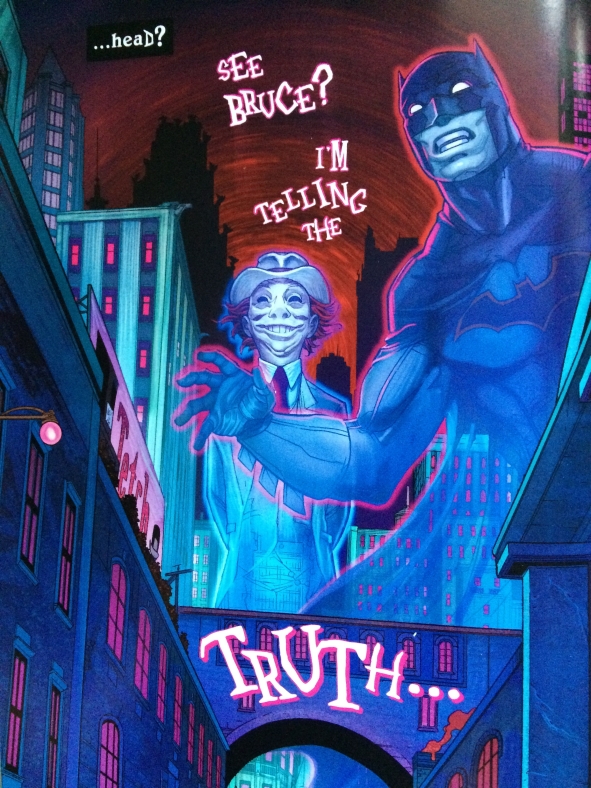 Let’s take a second to admire the art in this issue. Camuncoli is great. But then, let’s look at the last letter in that word “Head”.

That simple, off-kilter D in the word “Head” is the signal that Batman’s in for a mental world of hurt. As the issue continues, Batman and the Hatter’s voices begin to fluctuate, twist, and sometimes merge. On some pages, it’s hard to tell who’s speaking, which is completely by design.

At the same time, the Hatter keeps refusing to play in Batman’s boxes, making statements directly in the art, with no word balloons or narration boxes to contain them.

Note the Hatter’s physical form can’t be bound within solid lines and colors, either. This comic is real, real good.

The Hatter begins to convince Bruce he’s a madman in a wheelchair. That his mission broke him early and that, if he stops the Hatter here and now, he’ll be left to live that life. And Batman starts to buy it. He’s brought so low that he can’t manage to project his thoughts out away from himself. The narration boxes break entirely. And Bruce is reduced to repeating a simple “NO” to himself over and over, within the shield of his cape, as the Hatter’s words assault him from the ether.

It’s that bit within the black swatch of the cave that really gets me though.

In the penultimate moment, Batman’s thoughts alternate between the Hatter’s font and his own. His grip on reality is tenuous at best, and he must make a decision. Does he believe the Hatter’s story? And is he willing to live with the consequences should the Hatter be right?

Of course, he’s Batman, so he powers through. And from this point, Bruce’s narration resumes its usual form of the simple white font within the crisp black boxes. But there’s a lot hidden within that last word up there, that “Know” that Batman says to himself as he makes the decision to blow everything up, damn the consequences.

“Know” is another four-letter word, just like the word “Head,” which signaled the start of Bruce’s descent. Whereas the D in “Head” was stylized to show us that Bruce was no longer on solid ground, here the “now” in “Know” returns the word to form, segueing us back into a Batman who’s as sane as Batman can be. Stylizing exactly the word “now” also compliments the action in the panel, the moment that Batman presses the button that springs him from the Hatter’s trap and returns him to reality.

All-Star Batman 8 is an exemplary reminder of how great lettering can enhance a story, and how much room letterers have to play with typical styles and tropes when adding their touch to a comic. The twisting and breaking of those black boxes is even more impactful if you’ve read the other stories in All-Star Batman Vol. 2: Ends of the Earth, which also display Batman’s narration in boxes and play with lettering in interesting ways. The Poison Ivy story’s especially noteworthy, as the lettering gives clever readers a leg up on what’s actually happening near the end of the issue.

Of course, this single issue’s just a drop in the great-lettering bucket, and there are certainly more letterers who deserve their due. Expect to see more unique lettering efforts highlighted here in the future and, until next time, remember to pay attention not just to what people say, but how they say it.