Comics have a secret superpower you might not know about: they can tell you how to read them. Sometimes, creators are content to simply get their story down on the page. They don’t pay much attention to pacing, transitions, panel construction, and page layout. But when a good artist puts these tools to work, they produce a comic that controls your narrative movement and adds extra layers to the story.

If you want a master class in just what a creator can do when they’ve purposefully placed every line they’ve drawn, I’d recommend taking a look at Scott McCloud’s The Sculptor.

The Sculptor is the story of David Smith, an aspiring sculptor who sells his life for the ability to create incredible works of art. It’s a classic story, and McCloud tells it well, but the story’s not why we’re here.

We’re here because The Sculptor is one of the best examples of comics craftsmanship and storytelling I’ve ever seen.

Take another look at the page above. If you didn’t pay close attention, you might’ve missed how most every line points your eye exactly where McCloud wants it to go, resulting in a page that’s near effortless to read, with built-in pacing.

We travel down the first panel with David and Harry (a.k.a. Death) as they chat and cross the street. Then, Harry’s feet and the lines of the crosswalk lead us back up. With a brief, deliberate detour through the third panel, we arrive at the second.

There, the word balloons and the lines on the sidewalk lead us back down. David’s nose and eyes in the third panel do the same, bringing us to the fourth. The sidewalk and word balloons again point downward, to a final panel with an open border on the right side. The open border signals that a) we should turn the page and b) the action will continue after the turn (which it does).

Here’s another example, from a later conversation between Harry and David:

Here, Harry’s eyes lead you down to look at the chessboard as he makes his move. But the tilt of his Queen, the wrinkles on his shirt, and the lines of his face immediately lead you back up to the next panel.

There, David’s body language and word balloons pull you back down and to the right, into the third panel, where the curvature of the wall behind David tracks into the dialogue in the fourth. The conversation leads you down, over, and back up, where David’s stray hairs and his eyes lead you toward the page turn.

But comics storytelling isn’t all about eye direction, as The Sculptor makes clear. McCloud’s got a number of other tricks in his arsenal as well. Consider this next page, where a simple lack of panel borders magnifies David’s distress at being just one of countless other David Smiths in the world. 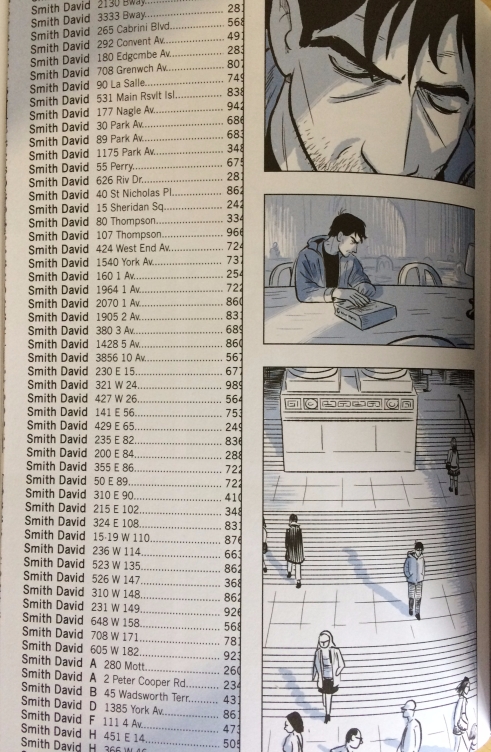 Or this set of pages from later in the book, part of a montage signaling the passing of David’s little remaining time. How to show that time is passing quickly, that it feels as if each moment is passing by faster and faster? Simple (I guess, if you’re Scott McCloud): you increase the number of panels per page.

If The Sculptor just led you from panel to panel correctly, that would be an achievement, but not a particularly notable one. But being able to do that while also playing with pacing, page construction, and the passage of time is very cool.

These pages have all the earmarks of the rest of the book: tight, expertly-placed lines and balloons that pull you from panel to panel and page to page. But the trick I want to talk about is evidenced only after the page turn, when David and Meg’s close, intimate conversation becomes something more open.

The Sculptor doesn’t just set the pace here, it sets the mood. The panels shift from dark, heavy, close shots to Meg standing on the balcony, open and free. But that feeling lasts just a second, as David’s news (and the shadows he’s standing in) threaten to bring everything back down again. If you’re just reading the book, taking it in as a story, you’re unlikely to consciously notice all this. You just know that the story feels right.

The Sculptor has other, even more impressive tricks to offer. But there lie spoilers. Suffice it to say, McCloud goes for it in The Sculptor‘s last chapter, and it doesn’t disappoint. As a model of comics pacing and storytelling, I’m not sure I’ve read anything as good.