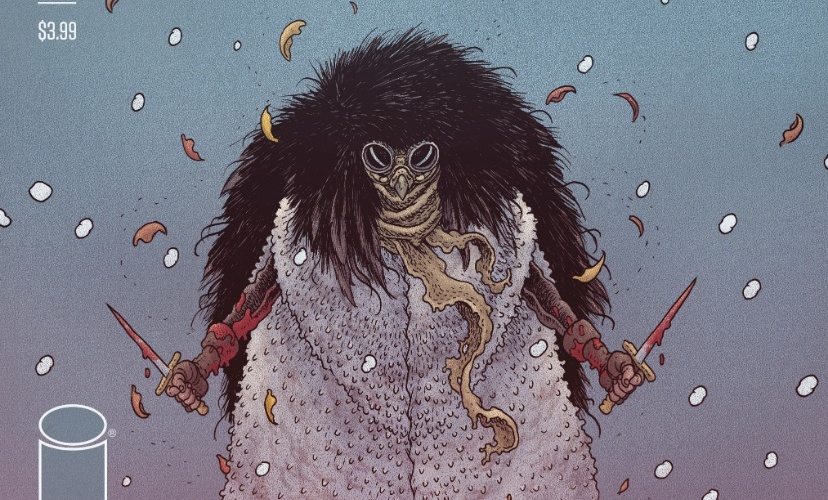 I’m a bit late to the party, but I’m here to tell you that Chapter One of Darcy Van Poelgeest, Ian Bertram, Matt Hollingsworth and co.’s Little Bird is dramatic and bonkers in all the right ways.

While Image pitched the series as a cross between East of West and Akira, I couldn’t help but think of Grant Morrison, Frank Quitely, and Cameron Stewart’s Batman and Robin work while reading Van Poelgeest’s dialogue and examining Bertram and Hollingsworth’s art.

Van Poelgeest’s characters speak using the same matter-of-fact, clipped, and cross-panel cadences as Morrison characters, and Bertram’s pencils combine Quitely’s incredible level of detail with Stewart’s kineticism. The end result is a comic book that MOVES – and accomplishes a lot within just 40 pages.

Van Poelgeest provides just enough context and background info to help readers understand the ongoing struggle between the mondo-religious United Nations of America and the Free People of Canada, as well as the characters involved in that struggle. But he also chooses to leave important pieces of information obscured, via teases that will surely be expanded upon later.

These cutaways and references help Little Bird‘s near-future feel like a fully-formed world of its own, while also explaining how it might have resulted from events happening right now in our world.

If you’re someone who prefers their dystopian stories to contain kinetic action, striking colors, and almost-but-not-quite-superhero-like characters, you should most definitely check out Little Bird. And if you’re someone who prefers limited series to ongoings, you’re in luck! Little Bird is set to run only five issues (which I really hope is enough time to properly explore the world – but I trust the creative team’s judgment).

If the book ends as well as it began, I really hope we get a continuation or another story by this same creative team (including letterer Aditya Bidikar and designer Ben Didier, who knock their contributions out of the park). Little Bird might be my favorite new series of 2019, and I’d hate to see a team that gels this well produce only one story.

One thought on “Check Out Little Bird Before It Ends”