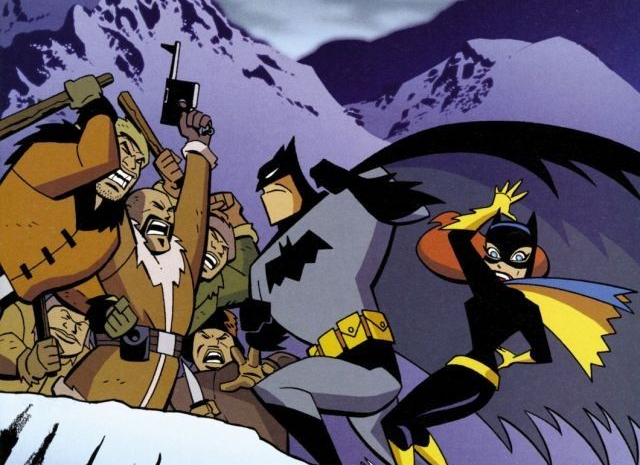 As I’ve gotten older, my views on certain issues have evolved. But despite the fact that I’ve taken a “learn to hunt for food” class, shot target practice with my father- and brother-in-law, and cheered that same father-in-law on in quick draw competitons, my views on guns will never, ever outgrow Batman: Gotham Adventures 9.

In the issue, Batman and Batgirl are hot on the trail of the Sensei, a killer who escaped Batman in Gotham City. They’ve traveled to the mountains of Tibet to bring the Sensei to justice, a task which will likely require them to face down many additional trained killers and assassins.

Sensing that she needs an edge, Batgirl acquires a gun from the guides who led her and Batman into the mountains. Because she respects Batman, Batgirl tells him that she has a gun with her. She tells him why she thinks he needs it; she attempts to justify her choice.

This is how Batman responds:

Imagine Reading That When You Were Nine Years Old

I was nine years old when Batman: Gotham Adventures 9 released. Imagine being nine years old and listening (yes, listening – everyone who grew up in the ’90s hears Kevin Conroy’s voice in their head when they read good Batman dialogue) to your favorite hero describe EXACTLY WHY he hates guns so much. And how VIVIDLY he remembers the image of the one particular gun that took his parents’ lives.

This man who can do anything, who can overcome ANYTHING (or at least believes he can – I sure believed he could) is stopped cold by the image of a gun. Their very existence sets him ill at ease. Which is why their very existence has always, and will always, set me ill at ease. No matter how many guns or gun owners I encounter, no matter how familiar I become with these weapons.

If you watched me shoot a rifle at a target range, you’d laugh at me. You wouldn’t be able to help yourself. My posture is terrible. I take far too long to steady the rifle, aim, and (gently, always far too gently, every damn time) pull the trigger. I am incredibly careful at all times, but not in the way an experienced shooter is. Experienced shooters understand the power of a gun (or at least, the good ones do), but they also possess an expertise that lets them move swiftly-yet-carefully. I do not possess that expertise, and so I move oh-so-slowly. Some might say overcautiously.

Part of that caution stems directly from the fact that, every time I pick up or set down a gun, I see Batman’s half-lit face in my mind. In the same way that Colt .45 is burnt into Bruce’s memory, the image of Batman sitting beside a tiny lamp in the mountains, telling Batgirl about the gun that killed his parents as steam from a hot drink trails up past his face, is burnt into mine.

But, Batman Lets Batgirl Make Her Own Choice

Upon re-reading this issue, I expected my attention to focus entirely on that speech Batman gives above. After all, it is the part of the issue that has remained in my memory.

Instead, I found myself noticing something else, something that younger versions of me likely never fully grasped the importance of. And that is, that while Batman expresses his opinion to Batgirl and asks her to get rid of her gun, he does not force her to do so.

In the same way that Batgirl respects Batman’s opinion (and thus attempts to justify herself to him), Batman respects hers. So despite the fact that he considers it a mistake, he lets Batgirl bring her gun to their confrontation with the Sensei. Letting her do so (and hearing Batgirl think she needs a gun despite her training) must anger him to no end. But Batman knows that he needs to let Barbara make this choice for herself. And so, somehow, on this most inflexible of points, Batman bends his rules – because he respects Batgirl’s opinion and trusts her to make the right choice, for both herself and for him.

That level of consideration for other people’s opinions and lifestyles is something I’ve attempted to incorporate into my life as I’ve gotten older. While I will likely never own a gun, I recognize that there are legitimate reasons for doing so. I recognize that some people do consider them to be a tool or a hobby and use them as such, as Batgirl suggests.

But I also believe that there are some guns that no one ever needs to own, and we should make it next-to-impossible to acquire those. I still have (many of) my own opinions on the subject. And at their foundation, those opinions are, and always will be, shaped by Batman: Gotham Adventures 9.

One thought on “The Issue of Batman: Gotham Adventures That Shaped My View on Guns”